A New York City park ranger from New Jersey has come forward to claim a $29.5 million lottery jackpot and the big win could not have come at a better time. 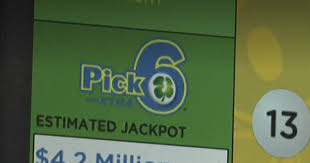 Judith Smith won the Pick 6 jackpot for the December 17 drawing, just a few days before a possible layoff from her work at Fort Wadsworth recreation area in Staten Island.

Mrs Smith who has struggled financially since the death of her spouse two years ago will pocket more than $14 million after taxes, more than enough to get her family on the road towards financial security.

"When I read it the first time, you know, and then you're like, wait a minute, this can't be, though," son William Smith said. "I put the ticket under the scanner, and it said file a claim, please see the clerk, and I knew right away, something, more than $500."

"My dad died two years ago," William Smith said. "He was sick for awhile. My mom's boyfriend's mother passed away in November, and her boyfriend actually died of a massive heart attack three weeks to the day in November."

"We'll continue to work, you know, set stuff up for the kids, go to college and travel," he said.

Eddy's Wine and Liquors on Avenue C in Bayonne who sold the winning ticket to Judith Smith are in line for a $10,000 bonus from the New Jersey Lottery Commission.