Living proof you can win the lottery twice

Lottery News » Living proof you can win the lottery twice

According to Jan Hannig, a UNC-Chapel Hill statistics professor it's not impossibly rare to win the lottery twice and Terry Splawn from North Carolina is living proof that it can happen. 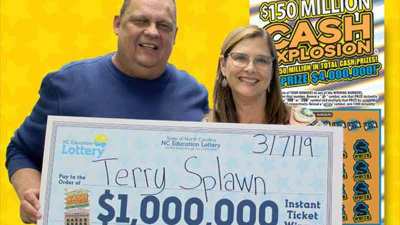 Officials from the North Carolina Education Lottery were delighted to award Terry his second $1 million prize this week, less than two years after presenting him with his first $1 million cheque.

In a further twist of fate the twice lucky winner purchased both winning tickets from the same store. Sam's Mini Stop on Old Charlotte Road in Concord

“What are the odds of this happening?” Splawn said. “I can't believe I won the lottery not once, but twice!”

"This is rare, but not impossibly rare," Jan Hannig, a UNC-Chapel Hill statistics professor, said of the odds of the same person winning two $1 million lottery prizes.

"My wife spent most of the last prize remodeling our home," Splawn told lottery officials. "I'm keeping this one. I'm going to put it aside for a rainy day."