Search is on for UK EuroMillions winner

Lottery News » Search is on for UK EuroMillions winner

Late last night UK lottery organiser Camelot confirmed that one Euromillions ticket sold in the UK matched all the numbers drawn to win a staggering £169 million. 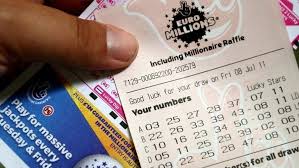 “They are now the UK’s biggest ever winner.

“Players all across the country are urged to check their tickets as soon as possible.

“It’s been a fantastic year for UK EuroMillions players with an amazing five jackpot wins.”

Lottery players across the UK are now being urged to check and recheck tickets from the EuroMillions draw held on Tuesday night.

Mr Carter added: "It's been a fantastic year for UK Euromillions players with an amazing five jackpot wins. In June, one lucky ticket-holder, who chose to remain anonymous, became one of the UK’s biggest ever winners after scooping a £123m jackpot.

"As always, the team are on hand to support and help guide the new winner as they start their adventure with their life-changing win.

"Every Euromillions ticket sold helps contribute to the more than £30m raised every week for good causes by The National Lottery - funding everything from local community projects to supporting the nation’s athletes."