After winning €500,000 on the lottery at the very first attempt of trying a Dublin dad is living proof that beginners luck really does exist. 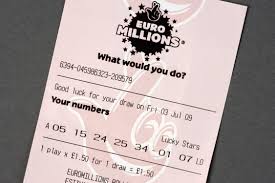 The winner who has so far opted to remain anonymous was shopping with his daughter at the Centra store on Grange Road in Rathfarnham, Dublin 14 when he decided to purchase a EuroMillions ticket for the draw on Tuesday, October 8th.

Collecting his prize at Ireland Lottery headquarters the first-timer explained to officials that it was his daughter's suggestion to purchase a ticket for the upcoming €190 million EuroMillions lottery draw.

"I was with my daughter last Tuesday in a queue in the shop and she was buying a ticket and she suggested I get one as the EuroMillions jackpot was €190 million.

"I had never bought a lottery ticket in my life so I just got what she got. I put it in my wallet and it was there until this morning. I never thought of checking it until I was in another shop and was speaking to the guy behind the counter when I pulled out the ticket.

"He told me the big prize was won over in the UK so I was about to throw it in the bin. I just scanned it in the machine and it told me to contact the National Lottery.

"I just ran out of the shop and rang the wife. She left work and we checked the numbers and surely enough the numbers all matched!"

"I cannot believe my luck — it's the very definition of beginners luck. Imagine if I had just threw the ticket away? To be honest, I don't think the news has sunken in just yet.